History of Czechoslovakian wolfdog from 1968.

Later, in 1968, in Bychory another matting in the kennels of the police was realized. This time between the wolf Argo and the female of German Shepherd Asta Z SNB, giving rise to the third line of blood.

The results are seen as positive by breeders. At this moment we start talking about Czechoslovakian wolfdog.
From 1968 a political liberation movement took place in Czechoslovakia, aimed at guaranteeing rights, making economic changes and dividing the country into two federations, Czech and Slovak.
These measures were not well seen by the USSR, which after failing in the diplomatic negotiations invaded the country on August 21, 1968 to command the troops of the Warsaw pact.
There was no military resistance and all planned reforms were canceled. After the invasion, the order to eliminate the race took place in the Czech Republic

Many hybrids were sent to kennels close to Malacky, in Slovakia separating them from the border guards and the Iron Curtain.
In this way, the army stopped pushing the breeders to create specimens valid for work on the border and were able to work in unifying the aesthetics of the breed. Civilian breeders took over the project.

Eida, Afir and Rep, members of the fourth blood line

In 1976, the breed was again requested to be registered, but again it was rejected.
In the year 1979 was born Rep Z Pohranièní, a gray hybrid, with the characteristic mask and a much more wolflike appearance. It was used as a player creating puppies much more wolfish than what has been seen so far, this being the origin of the Slovak line. From Rep Z Pohranièní was generated the standard of what we know today as a Czechoslovakian wolfdog.

During the first half of the 80’s the name of the breed was updated from Czech Wolf Dog to Czechoslovakian Wolf Dog due to the contribution made by the Slovaks.
Finally, at the end of 1981 the creation of the club and the execution of the genealogical record of the 43 specimens existing at the time were allowed. 10 years later, 1552 dogs had been
registered.

On March 20, 1982 the Czechoslovakian Wolf Dog Breeder Club was founded in Brno. In the same year after the breeders’ proposal, the Czechoslovakian Wolf Dog was recognized as a
national breed.
Unfortunately, the Slovak breeders ignored the breeding program developed by Karel Hartl earlier and crossed indiscriminately with Rep Z Pohranièní. The result was that 83% of
Czechoslovakian wolfdogs were close relatives, with the danger of consanguinity for the breed. Due to this it was decided to introduce another independent line in order to recover an
unsustainable situation.
The last wolf blood supply to the breed occurs in Libejovice, southern Bohemia, with the matting between the German shepherd Bojar Von Schotterhof and the wolf Lejdy. The litter was born
on April 26, 1983.

In this litter was born Kazan Pohranicni Z, which was used to improve the breed.

Kazan and his daugther Cita, from the fith blood line

Kazan Z Pohranicni had offspring with a greater dog-like appearance.
In short, the breed was made up of 4 wolves (Brita, Argo, Sarik and Lejdy) and multiple German shepherds. The Czechoslovakian wolfdog standard was preliminarily ratified by the FCI on 13
June 1989 in Helsinki, assigned the number 332. It became part of the group of races in tests with a duration of 10 years.
Finally, in 1999 the FCI registered the breed Czechoslovakian wolf definitively with the standard n.332 / 03.09.1999 included in group 1, shepherd dogs and cattle dogs. They stop being
considered hybrids since they constitute a recognized breed.
In 2005, Eligo Z Peronowki was born, with a greater wolf appearance than the previous ones and is used for breeding and improve breed. 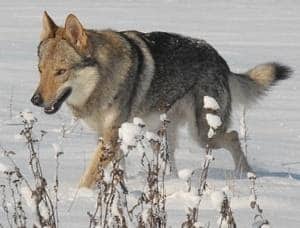 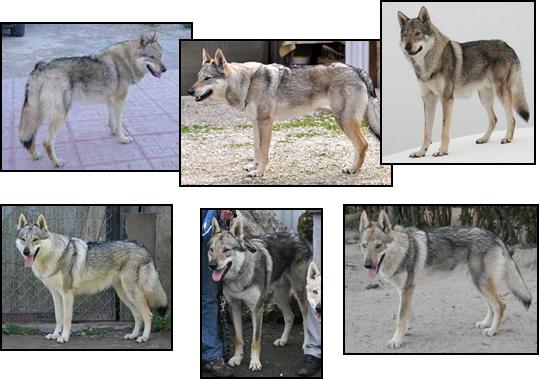 Emba, Naboo, Volcan, Morrigan, Elpasso and Jaud, some of the puppies of Eligo Z Peronowki
i

This breed was slow to arrive in Spain, being still little known today. The first individuals arrived in Spain between 2005 and 2006. The same year 2006 several breeders joined to create the
Spanish club of the Czechoslovakian wolfdog (Cepeloch), currently merged with the current official breed club and friendly club of the RSCE, The CCAPLC.
In Spain, although with a very small population, it is growing at a good pace, which has now allowed a community of more than 2000 individuals.
On the other hand, outside our borders is a well-settled breed, which is estimated to have a population of more than 15,000 individuals distributed in 44 countries around the world.
Although still a little known race begins to win adepts at a good pace. In addition, in spite of the difficulties of their training for work in comparison with other races, in Northern Europe they are
being used for civil protection, river rescue, red cross, army, avalanche rescue, training, security or therapy.

The information on this page about the history of the Czechoslovakian Wolf Dog has been extracted from the web http://tenerunplc.blogspot.com.es/. Thanks to Ruth Nieto and Fernando Lourido, for their authorization to reproduce this text, and for the kn owledge they have transmitted to me and that help me understand this breed a little more each day. Thank you for your effort and dedication to bring people to the Czechoslovakian Wolf Dog and to help the general knowledge of this breed in our country.