The ancestors of the present Labrador originated on the island of Newfoundland, now part of the province of Newfoundland and Labrador, Canada. The forerunner of the Labrador breed was
the St John waterdog, a breed that emerged through breeding done by the first settlers of the island in the sixteenth century. The ancestors of the dogs of St. John are not known, but probably
were a random mixture of English, Irish and Portuguese work races.
There were two lines of St. John’s dogs

was of a heavier complexion, large and long-haired, was the forerunner of the Newfoundland dog and was probably the result of the crossing of dogs of San Juan
with the mastiffs brought to the island by the generations of Portuguese fishermen who had been Fishing on the high seas since the 16th century.

smaller, lighter in complexion, active, short and soft fur, was the forerunner of the Labrador Retriever, being raised mainly by the English and Irish.

Local fishermen
originally used the dog to help carry the ropes between the boats, help retrieve and pull the fishing nets out of the water. The dog’s loyalty, his taste for water, and his willingness to work hard
were valuable traits for fishermen.8 The white breast, the paws, the nose and the muzzle – known as tuxedo – were characteristic of San’s dog John and often appear in mixed labradors, and
occasionally manifest themselves in pure Labradors as a small white spot on the chest – known as a medallion – or slight strands of white hair on the paws or on the muzzle.
During the nineteenth century a number of St. John’s dogs were taken to the Poole region of England, then one of the fish-trading centers for the upper bourgeoisie, where these animals came
to be regarded as hunting dogs and A few breeding farms in England began to reproduce them at the same time on the island of Newfoundland a combination of protectionist policies of
sheep farming – which led to exorbitantly raising the taxes of dog owners -, coupled with the quarantine for rabies in England that prevented the repatriation of dogs, led to the gradual
disappearance and consequent extinction of the dog of San Juan in his country of origin, Canada.
The first and second Earl of Malmesbury raised dogs to hunt ducks on their estate, as well as the fifth and sixth Dukes of Buccleuch, along with Lord George’s younger son William MontaguDouglas-Scott, 10 played a decisive role in the development and establishment of the modern labrador race in nineteenth-century England. The Avon dogs – “Buccleuch Avon” and “Ned” –
given by Malmesbury to help the Duke of Buccleuch in his breeding program in the 1880s are considered the ancestors of the contemporary labrador.
The first dog of St. John is said to have arrived in England around 1820. However, the breed’s reputation spread to England much earlier. There is a story that says the Earl of Malmesbury saw a
San Juan dog on a fishing boat and immediately made arrangements with traders to have some of these dogs exported to England. The ancestors of the first peasants so impressed the earl,
by his ability and ability to recover anything in the water and on earth, that he dedicated his whole hatchery to the development and establishment of the race

The founding caste of what is now the Labrador Retriever was first known as the San Juan or Newfoundland. It was not until the dogs were later brought to England, that they were named in
honor of the Canadian geographical area known as “the Labrador” or simply “Labrador” to distinguish them from the breed of greater size and weight: the Newfoundland dog, although the race
was the most southerly from the Avalon Peninsula.

The first written reference of the breed was in 1814 – “Instructions to Young Athletes” by Colonel Peter Hawker -, the first painting in 1823 – “Cora: A Labrador Bitch” by Edwin Landseer – and
the first photograph in 1856-the “Nell” dog belonging to the Earl of Home, described as both a Labrador and a St. John’s dog.-In 1870 the name Labrador Retriever became common in England.
The first yellow Labrador to be recorded Was born in 1899 – Ben of Hyde, the breeding ground of Major CJ Radclyffe. The first dog to appear on the cover of Life magazine was a black
labrador retriever named “Blind of Arden” in the copy of December 12, 1938 The San Juan dog survived until the 1980s, the last two specimens were photographed old around 1981

Yellow and chocolate pups would occasionally appear, until finally gaining acceptance in the 20th century.The first recognized yellow labrador was Ben of Hyde, born in 1899, and Chocolate
Labradors became more established in the 1930’s

In the early years of the breed through to the mid-20th century, Labradors of a shade we would now call “yellow” were in fact a dark, almost butterscotch, colour (visible in early yellow Labrador
photographs). The shade was known as “Golden” until required to be changed by the UK Kennel Club, on the grounds that “Gold” was not actually a colour. Over the 20th century a preference
for far lighter shades of yellow through to cream prevailed, until today most yellow Labradors are of this shade.

Jack Vanderwyk traces the origins of all Chocolate Labradors listed on the LabradorNet database (some 34,000 Labrador dogs of all shades) to eight original bloodlines. However, the shade
was not seen as a distinct colour until the 20th century; before then, according to Vanderwyk, such dogs can be traced but were not registered. A degree of crossbreeding with Flatcoat or
Chesapeake Bay retrievers was also documented in the early 20th century, prior to recognition. Chocolate Labradors were also well established in the early 20th century at the kennels of the
Earl of Feversham, and Lady Ward of Chiltonfoliat. The bloodlines as traced by Vanderwyk each lead back to three black Labradors in the 1880s—Buccleuch Avon (m), and his sire and dam,
Malmesbury Tramp (m), and Malmesbury June (f). Morningtown Tobla is also named as an important intermediary, and according to the studbook of Buccleuch Kennels, the chocolates in this
kennel came through FTW Peter of Faskally (1908) 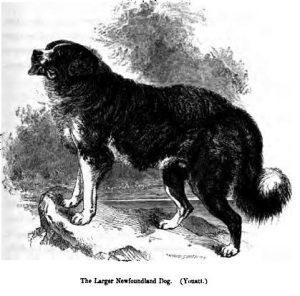 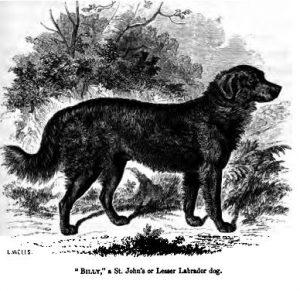 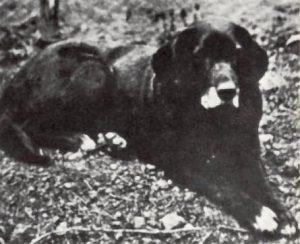 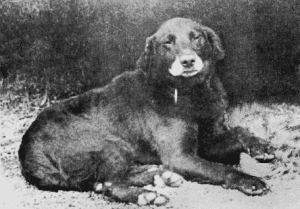 «Buccleuch Avon» (1885). Base dog in the lines of the modern labrador 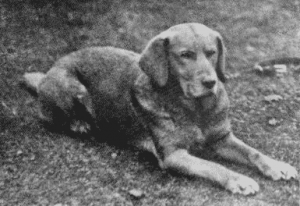 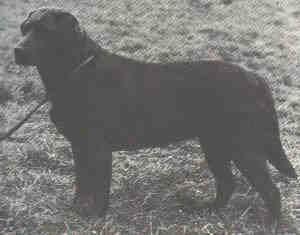 The Labrador retriever breed was recognized by the British Kennel Club in 1903. Its popularity was increasing both in the exhibitions and in the hunting environments; just a moment
summit for the race was when the dog «Bramshaw Bob», owned by Lady Lorna Howe, got the Crufts BIS of 1932 and 1933. This breeder would also get this appreciated
award in 1937, this time with «Cheverella Ben of Banchory». The Club of the Labrador of England was founded in 1916, time in which the majority of copies were black, although the
yellows began to be valued. The first copy of this color was registered in 1899, born of two black parents.
The first standard of the breed came out in 1916, and was partially modified in 1950. The FCI standard in force is that of 2011.12 The AKC standard dates from 1994 and differs slightly from the FCI.

Kennels with influence on history

The decade of the 40s and 50s is fundamental in the evolution of the Labrador Retriever breed, since at that time hatcheries emerge and dogs leave a deep and already recognizable
Current Labradors.

Perhaps the best known, influential and valuable breeding ground of recent decades has been Sandylands. Its reputation as the origin of the most typical and representative yellow peasants of the
race quickly crossed the border of the British Isles and nowadays its name is synonymous with typicity anywhere in the world.
Another of the relevant breeders in the type of farmers that we can see today is Ballyduff. Founded in the 1950s by Mrs. Docking, today it is her daughter who is responsible for perpetuating the
line. Far from the type attributed to the Sandylands, the Ballyduffs have been farmers with an excellent sense and skill for hunting, represented by powerful black males
of expressive look.

Blaircourt is another hatchery whose activity has left its mark since its beginnings in the mid-1950s, and since 1973 Follytower has been producing very typical vines, elegantly
its characteristic neck and front part, which provides balance, both in movement and posing.
Another fundamental breeding place of that time is Kinley, of Mr. and Mrs. Wrigley, perhaps essential to understand the evolution of the yellow labrador in recent times. In those 60’s,
where winning a first place in open class with a yellow labrador was something exceptional, given the supremacy and fidelity to the standard that black dogs represented, the Wrigley
They endeavored to make their yellow dogs fit specimens for both the ring and field tests. But maybe the best yellow hatchery has been, and is currently,
Poolstead.

The Kimvalley hatchery has also been one of the most important and influential of the last 50 years, with special emphasis on some of its yellow females whose presence can be
trace today in many fundamental pedigrees for the race.