In genetics a character represents the visible, measurable, or quantifiable expression of one or several genes. The set of chromosomes carrying the genes form the individual’s genotype,
whereas the expression of those genes influenced by the environment constitutes the phenotype.
To understand the inheritance of color it is indispensable to define several terms. First, we must know that there is a relationship of dominance and recessiveness between the genes that
determine color. The dominant genes will be represented by uppercase letters, and recessive lowercase, whenever a recessive gene is paired with a dominant, the latter will prevent expression
in the phenotype of the recessive gene, although this gene will appear in the genotype of the individual. Genes are formed by pairs of alleles that are inherited independently of each parent, and
are located on the chromosome at a given loci. Among these alleles will be established epistatic or hypostatic type relationships as they allow to express or cover the genes to which they refer.
The genes that transmit the color are two pairs, and their relations of dominance / recessivity and epi / hyposostasia are the following:

The combination of these genes in color (Bb) and transmission (Ee) will produce us 9 different copies with the following genetic maps:

According to Mendel’s theory of heredity, there are two types of genes. The so-called uppercase letters are dominant genes and those that are named with lowercase letters are recessive
genes.
Quite simply, for each character, we have a pair of genes, one of the male and one of the female.
For example,if the blue eye color is the gene a and the brown eye color is the A gene … what is the dominant one? The color brown, that is, that a child who inherits the gene from his mother
and the gene A of his father will have a genotype for the color of Aa eyes, then have brown eyes, but carries the color blue, so that you can have children with blue eyes if your future partner
also carries the gene a.
In short, dominant characters always appear when the gene that defines them appears, whereas in order for the recessive character to appear in the phenotype (external appearance), the
individual must have two recessive genes: -AA; Brown eyes, pure, does not carry any other color.-Aa; Brown eyes, bearer of blue color -aa; blue eyes.

If you cross with another individual aa will never leave a progeny with brown eyes. That is what defines the dominant gene: two recessive copies can not give rise to a dominant, therefore, two
yellow labradors they will never have black puppies, and two labrador chocolates either.
Why a matting between a pure chocolate labrador and another pure yellow labrador gives 100% black puppies why?
In the labrador, the color is not defined by a pair of genes, if not by four genes (two of the male and two of the female).
Let’s explain each one separately:

This gene is the one that defines that the dog is black or yellow. In capital letters it is black, that is, a dog carrying this gene will not be yellow. It will be black or chocolate, depending on the
genotype of the other genes.
Gen e – Yellow gene

The labrador that carries a gene e will be carrier of yellow, can be chocolate or black. The labrador carrying two genes will always be yellow.
Gen B – Black gene associated with chocolate.
The labrador who has a B gene will not be chocolate. It will be black or yellow, depending on the rest of the genes.
Gen b –  Gen chocolate.

The labrador that carries a gene b will be a carrier of chocolate.
The labrador that carries two genes bb will be chocolate or yellow (will depend on the rest of genes).
The genes E and e define the color: black or yellow.
However, genes B and b define the oxidation of black.
The color chocolate is a black oxidation, so that for a puppy to be chocolate not only have to have a genotype bb, in addition, must have at least one gene E, since, if the puppy does not have
the black gene, no You can oxidize that color.
In cases where the puppy only has yellow genes and chocolates, it will be born depigmented (nbp), as the chocolate gene oxidizes the color and eliminates the pigmentation.
In the case of black nothing happens, but in yellow, the labrador has clear eyes and lack of mucous pigmentation, something highly undesirable and not admitted by the standard. And most
likely with future skin problems.
Let’s review ….….

EEBB:  A pure black labrador, that is, one that can not give offspring of other colors has an genotype EEBB.
That is, it will give its puppies a gene from each group, as it only has E and B, it will only transmit the black color, reason why its puppies will be E_B_ (from here the stripes are incognito,
since we do not know the genotype of the Another player). When the E gene and the B gene are together, the Labrador is always black.

EeBB: Black labrador carrying yellow
He will transmit the B gene to all his offspring, so he will not have any chocolate cubs (all will be B_, then chocolate-dependent blacks). And it will transmit 50% of the E gene (black
puppies) and the other 50% of the e gene (which may be yellow if they receive another gene from the other player or black carriers of yellow, if they also receive an E gene).

EEBb: Black carrier of chocolate.
It has two E genes, so it is black and does not carry yellow. It has a B gene, which dominates the b gene, so it’s not chocolate. This Labrador will not have yellow puppies, because it will
always transmit the E gene, but will transmit the black gene B to 50% of their children (which will not be chocolates) and the gene b to the other 50% that will or will not be chocolates as
they receive another gene bo do not.

eeBB: Yellow Labrador.
The desired yellow, has two genes e, so the color is yellow, and also has two B genes, so there is no oxidation. The pigmentation is good. It will only have black and yellow puppies (as it
matting).

EEbb: Chocolate labrador.
Of the black genes oxidized by two genes of chocolates. You will only have black puppies and chocolates (as you matting).

Why are 100% of the black puppies born from the crossing of a pure yellow labrador and a pure chocolate?

eeBB x EEbb ….. we know that each player will transmit one gene from each group.
The player 1 (eeBB) is going to transmit eB always (it does not have others), with which its puppies will be: e_B_
The player 2 (EEbb) only transmits Eb, therefore, it can not transmit any other, so its puppies will be: E_B_
All the puppies of this cross are EeBb, what color is this?
They have a black gene and a yellow gene, dominate the black, then yellow are not. And also, they have another black gene and a chocolate …. According to what we have seen black
dominated and would not be chocolates.
This is a black carrying the two colors.
And to finish, there are also:
Eebb: Chocolate Labrador carrier of yellow. You can have puppies of all three colors.
eeBb: Yellow labrador carrier of chocolate. You can have cubs of all three colors.
eebb: yellow labrador bearer of chocolate. Unwanted crossover, the two chocolates genes oxidize the yellow and the dog is depigmented (nbp). Not accept by standard.
Of all the possible combinations of these nine genotypes we obtain 44 different crosses that we specified in the tabs below with their types and percentages. 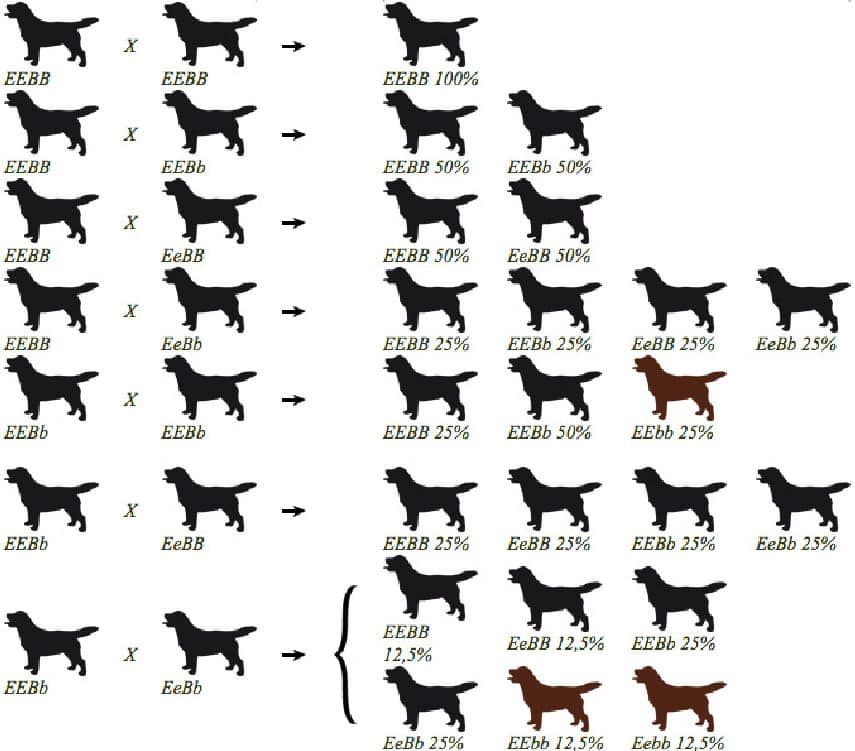 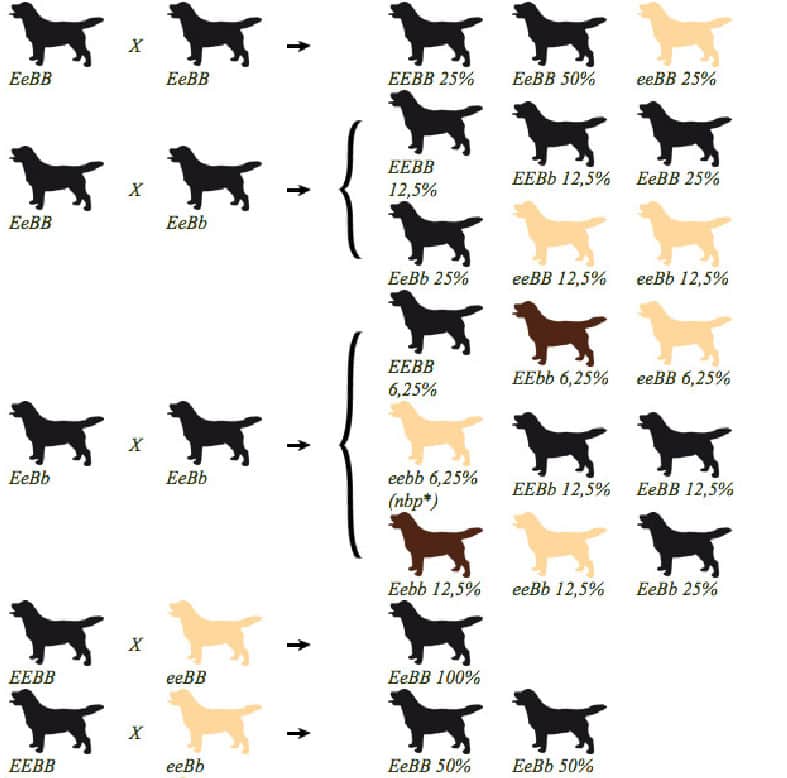 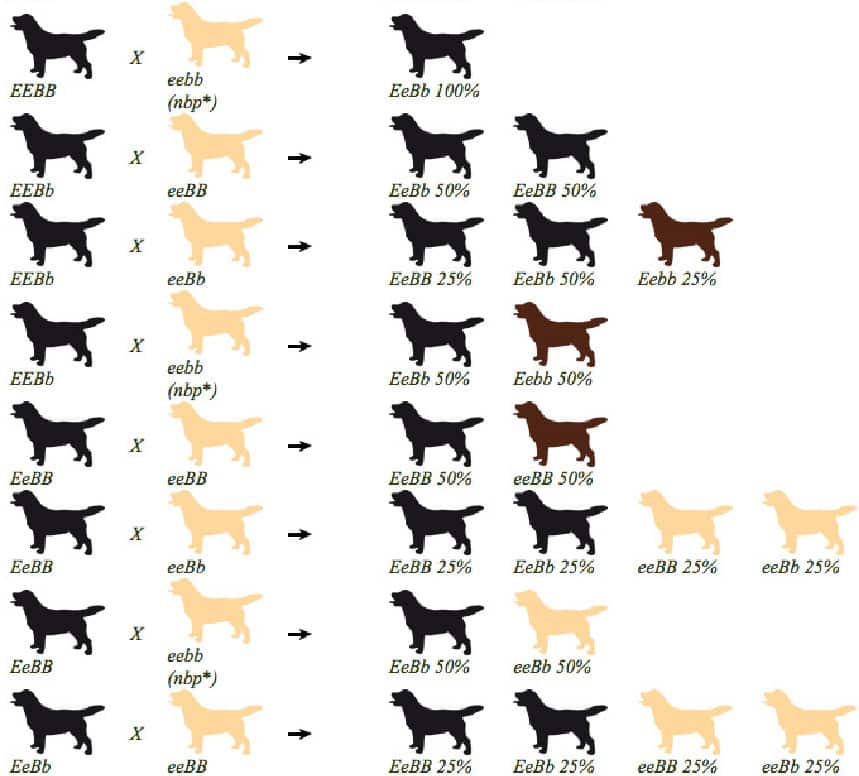 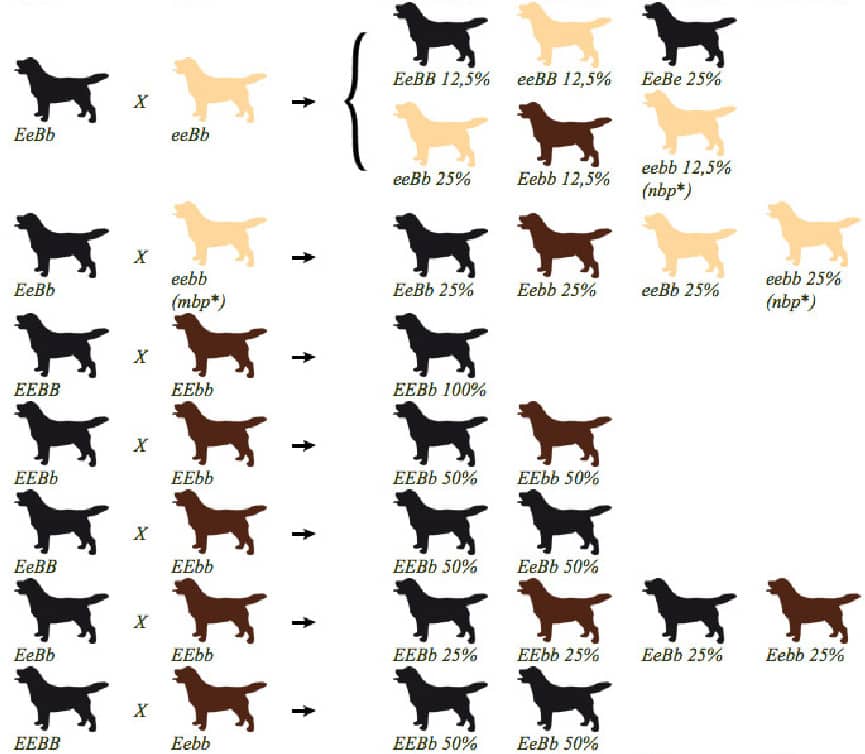 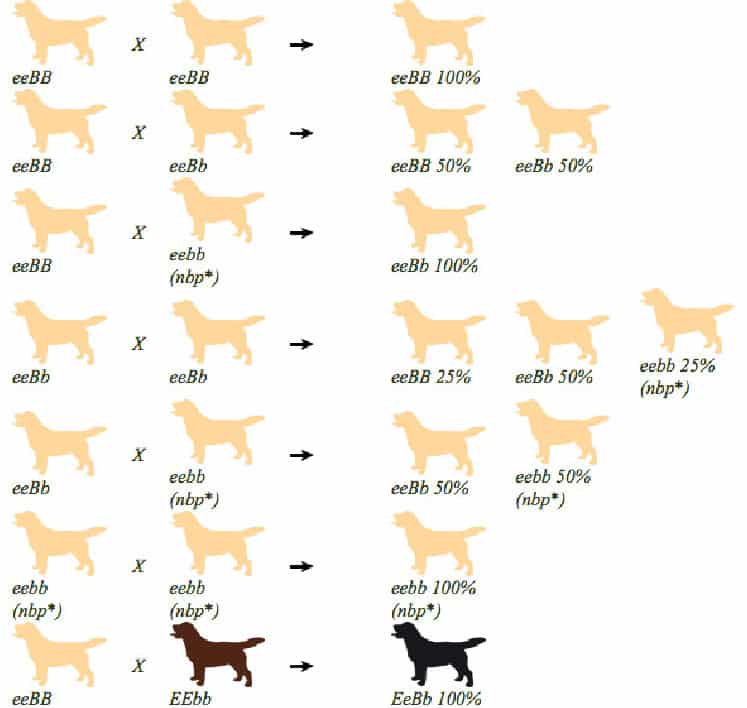